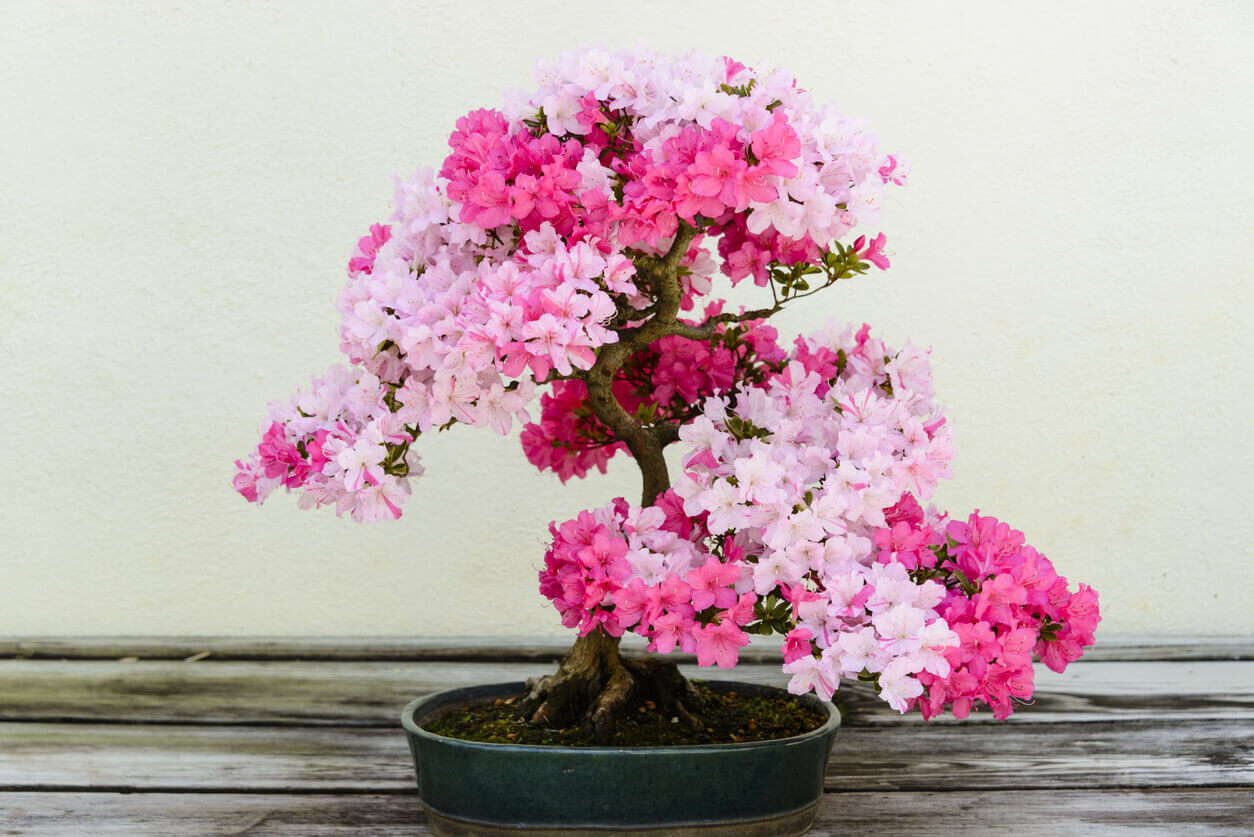 06 Apr All About Flowering Bonsais

Posted at 07:00h in Growing by kellogggarden 0 Comments
1 Like

The art of bonsai is intriguing enough with its mini trees, gnarled trunks, and twisting forms. But how about we just go overboard and add some flowers as well? There are a number of flowering plants that take to bonsai quite well, but we’re especially fond of our Top 5 — they’re bursting with blooms and ready to provide drama to your home and garden!

1. Azalea: (Rhododendrun indicum) With heavy flowering in a multitude of colors, it’s easy to see why azaleas are one of the most popular blooming bonsais. Because there are so many varieties of azalea, you’ll want to choose a dwarf size if you’re interested in bonsai — Satsuki and Kurume are two of the more commonly used because they’re evergreen and small. Give it full to part sun outside and bright indirect light inside, and protect them from temperatures below 41 degrees.

They prefer slightly acidic soil that is well-drained but never allowed to dry out. Avoid watering with hard tap water, opting for rainwater or filtered water instead. Feed with azalea or rhododendron fertilizer, and avoid fertilizing (or feed at half the dosage) during flowering. Prune immediately after flowering — prune too late and oops!  You’ll be removing next year’s blooms. 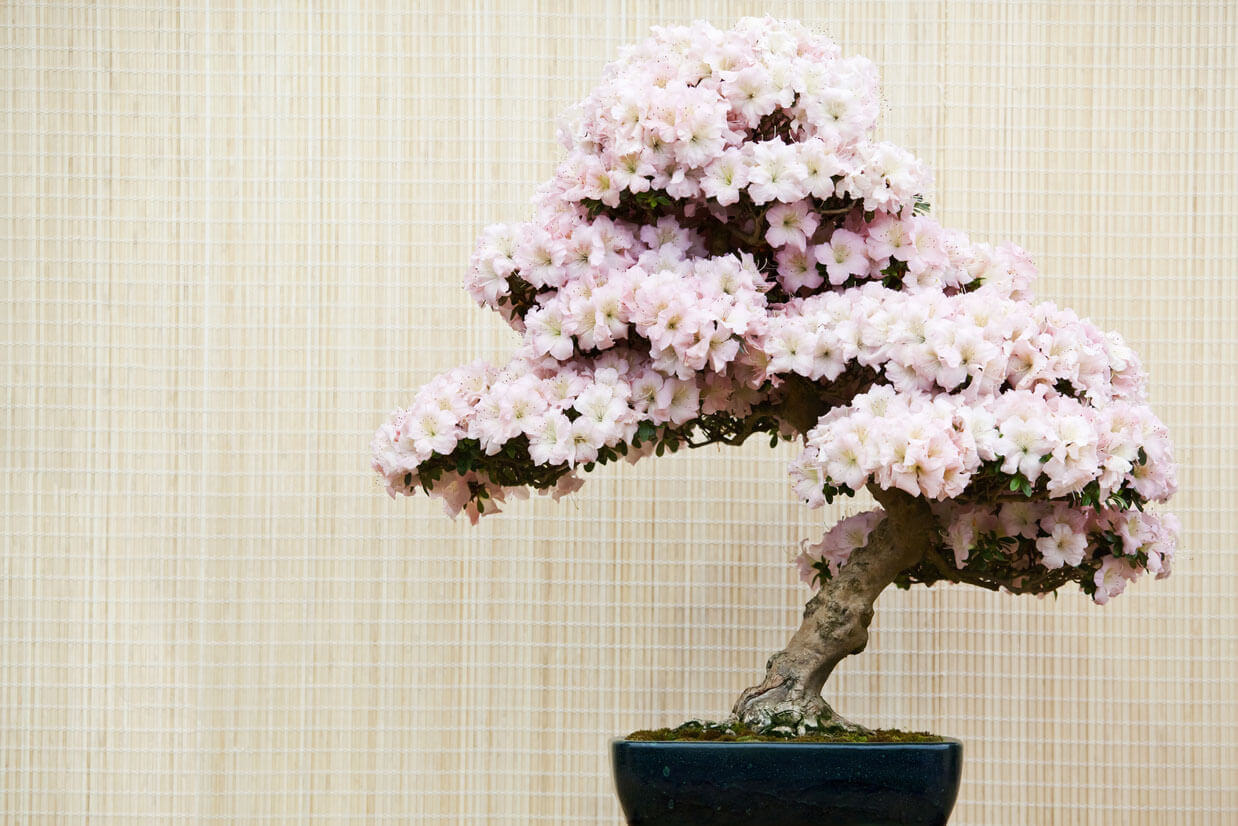 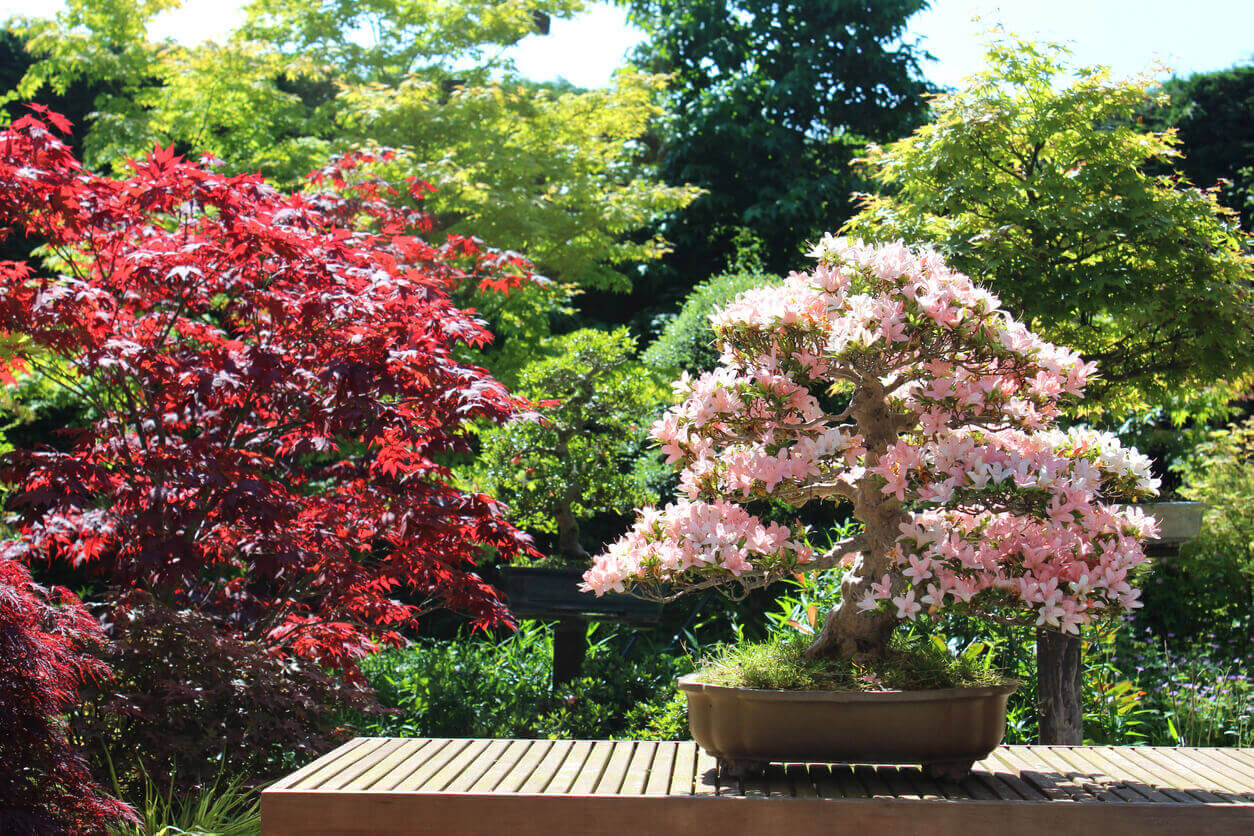 2. Cherry Blossom: (Prunus serrulata) Perhaps one of the most beloved of the blooming bonsai, cherry blossom bonsai has a single trunk with small dark green deciduous leaves and utterly charming pink and white blossoms in April-May. As the blooms fall, they create a floral carpet below.

Cherry blossom bonsai needs full sun during the growing season and a 3-month period of cold conditions when it’s dormant in the winter (the garage is ideal). Water it regularly to avoid drying out and fertilize on a monthly basis. Prune after all the flowers are spent, and never remove all of the new growth (just as needed, please).

3. Bougainvillea: (Bougainvillea spp.) The woody and gnarled trunk of bougainvillea make it a natural choice for bonsai, but like other flowering trees, be sure to choose a dwarf variety for best bonsai results (‘Pink Pixie’, for example). The brightly colored flowers are actually bracts and come in vivid shades of pink, red, orange, yellow, violet, and white.

Flowering is during the spring and summer, and during those months, the plant should be outside to receive plenty of sunshine. Indoors, set it by a very bright window. During colder months, your bougainvillea bonsai is vulnerable to temps below 30 degrees and should be brought inside to protect it. Water enough to establish it, then back off to avoid overwatering — this is one of the more drought-tolerant blooming bonsais for you forgetful waterers out there! Use a low nitrogen fertilizer in the spring, and remove flower tips after each bloom cycle. 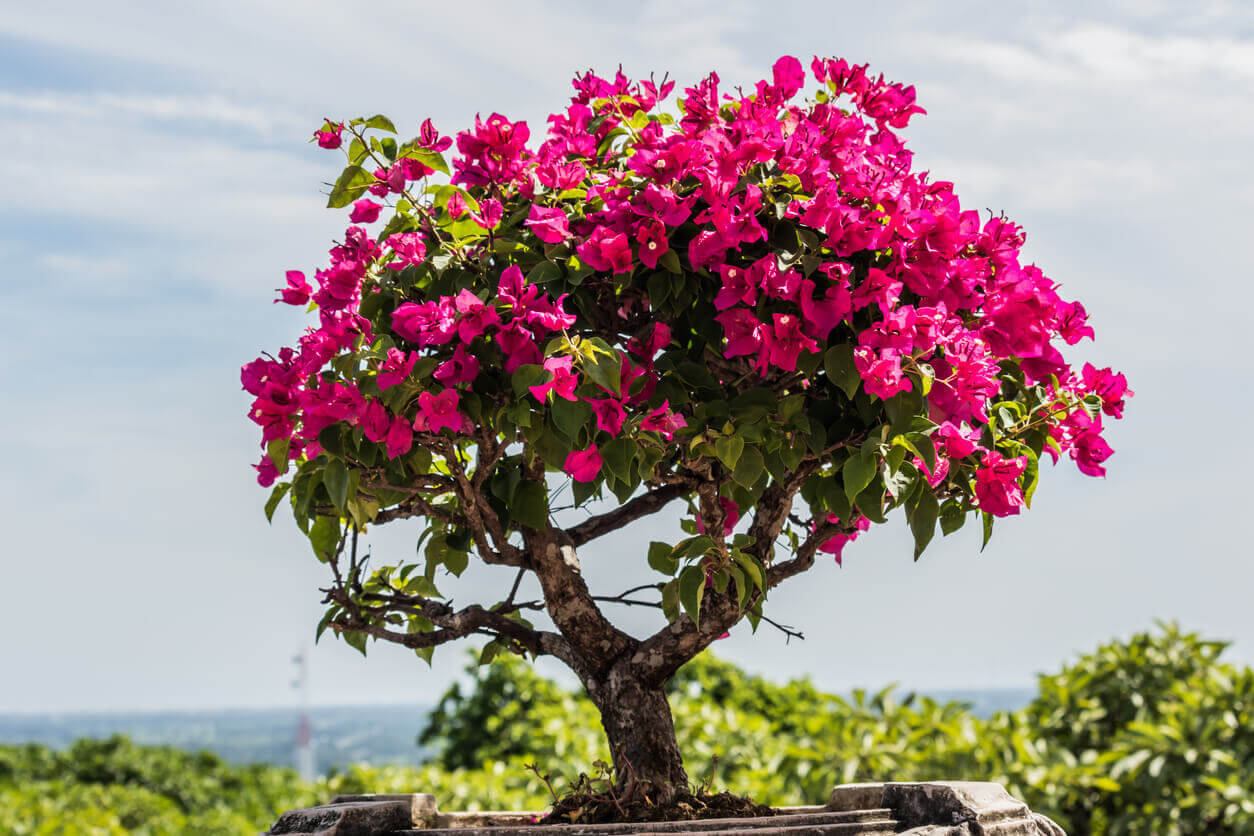 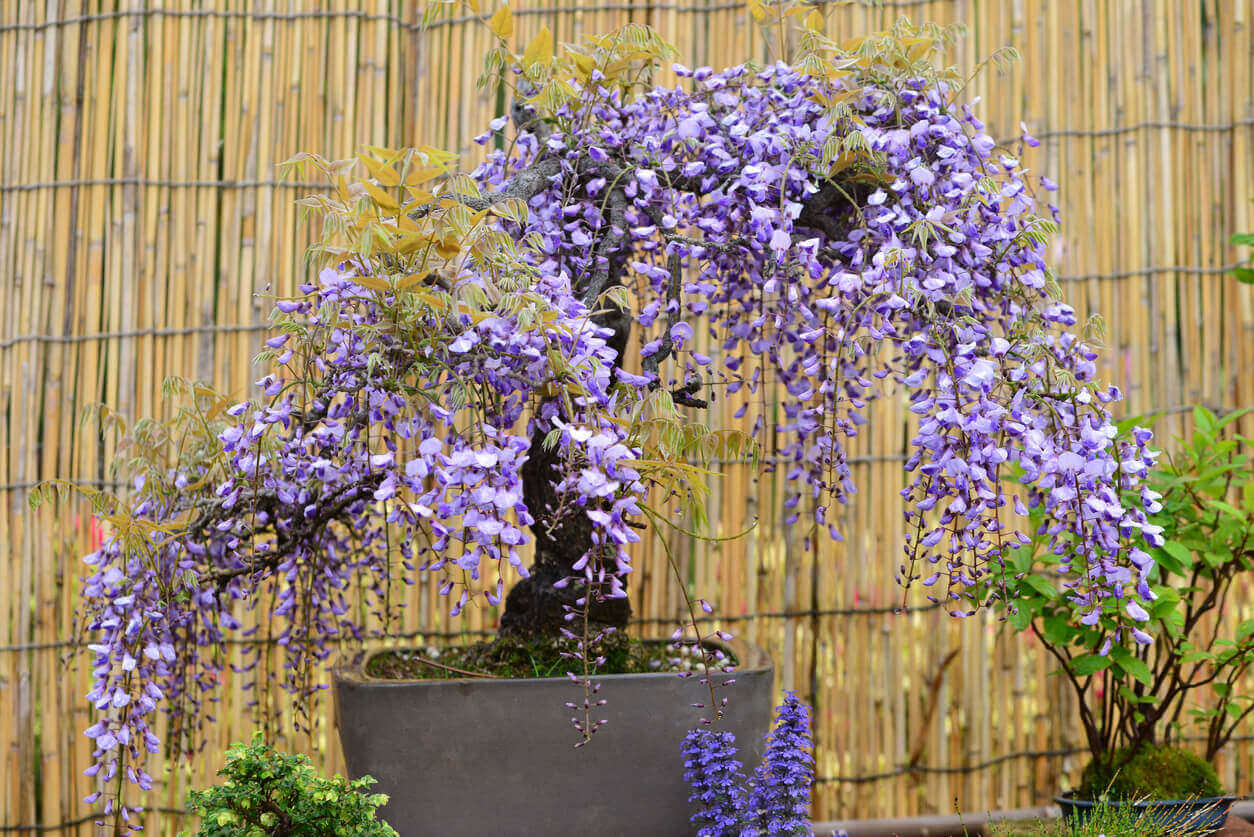 4. Wisteria: (Wisteria sinensis or Wisteria floribunda) Wisteria bonsais are truly a sight to behold, with their stunning profusion of drooping bluish-purple and fragrant flowers. They tend to be larger than most bonsais, however, because the bloom clusters are so large that they need a plant with some height to balance the weight and proportion.

Give it full outdoor sun during the growing season with a regular stream of water and monthly fertilizer. After blooming and during dormancy, place your wisteria bonsai in a frost-free greenhouse, shed, or garage. Prune in early spring, or after flowering. Wait until after the leaves have fallen to prune branches and twigs.

5. Gardenia: (Gardenia jasminoides) This evergreen bonsai boasts glossy green leaves and white, highly fragrant flowers in spring and summer. Give it 4 hours of full sun every day, but be prepared to adjust that if you live in a very hot climate. Each fall as the temperatures drop, bring your gardenia bonsai inside to protect it.

Gardenias love regular watering and extra humidity, but avoid overwatering and allowing your plant to sit in water. Aim for soil that is evenly moist but never soggy. Prune after flowering to shape branches, or in early spring to keep your plant bushy, making cuts just above leaf joints. 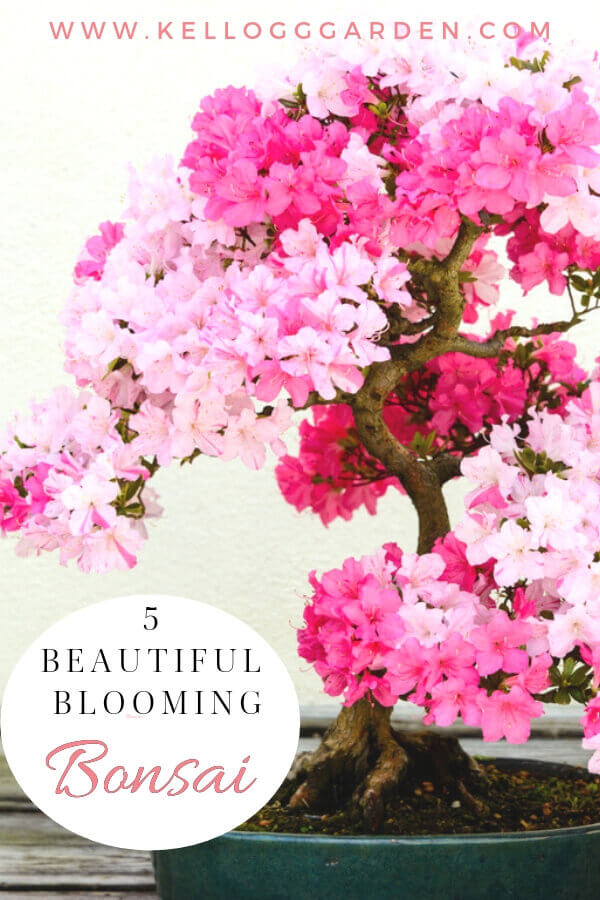