It is rewarding to see homegrown stalks of corn swaying in the breeze within your garden, but the real prize is reaping a strong and healthy harvest of sweet corn throughout the sun-drenched days of summer. Nothing screams summer more than sweet, juicy, corn harvested, and eaten right off of the cob.

This warm-weather loving vegetable is a treat to behold and is anxiously anticipated by gardeners each year. Grow corn with ease and to set yourself up for sweet success in the garden this season with these essential growing tips. 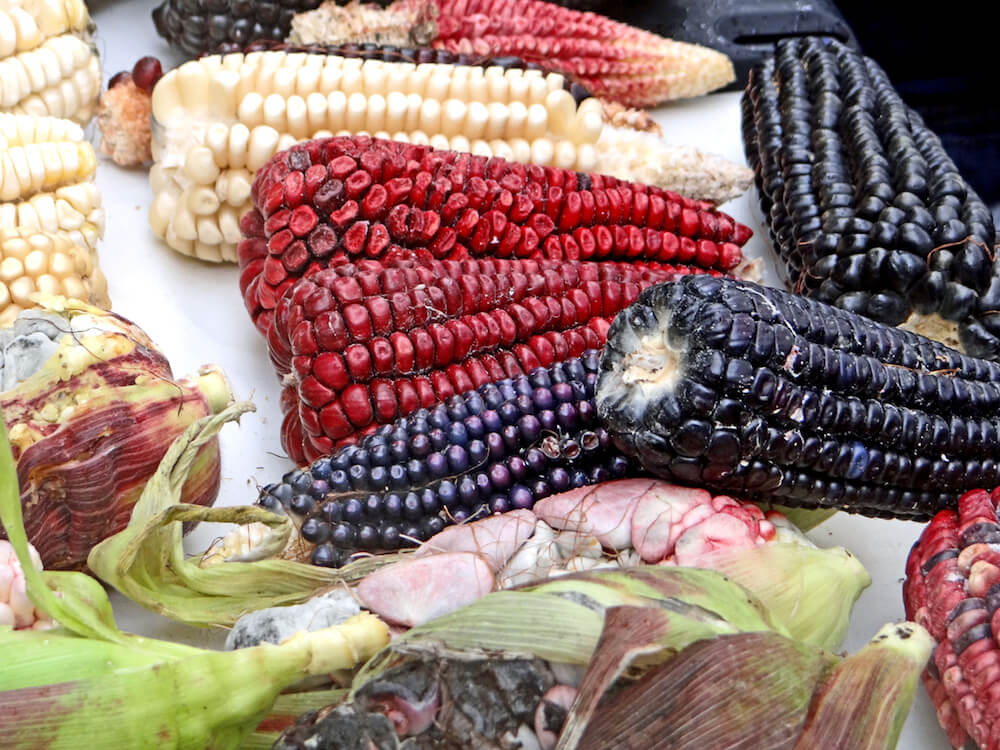 Corn grows best in a warm and sunny climate that averages between 75–85° F during its growing season. The standard guide for most gardeners is to plant seeds in full sun about two weeks before the last anticipated frost date.

Healthy soil means healthy roots for your corn, so it’s best to put the time in to amend the soil in your garden before planting. The more organic matter that you can incorporate into the soil, the better for vegetable gardens. Not only does it provide nutrients, but it also draws in beneficial organisms that maintain the overall health of your garden.

Use a mix of sand, peat, and manure compost to create an ideal growing environment to provide your corn with rich soil with good drainage. Loosen up the soil to a depth of 8 inches and amend the soil to adjust to the proper pH of between 5.8 and 6.8. For best results, add 2 to 4 inches of compost to the garden bed to improve soil moisture and nutrient retention. 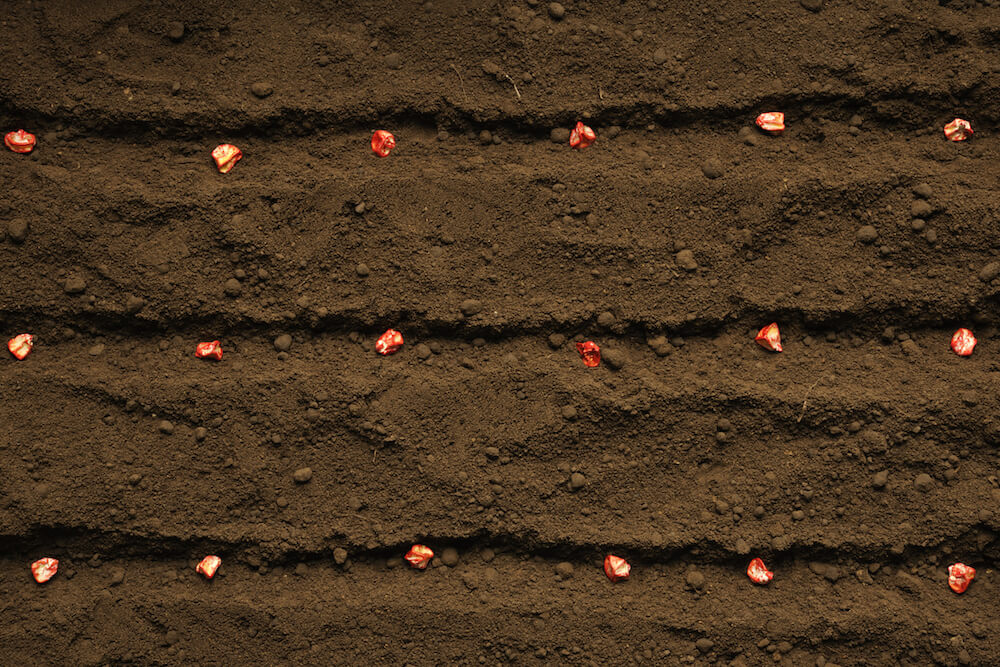 How to Plant Corn

Corn plants are wind pollinating plants, so it is essential to plant a minimum of four side-by-side rows to ensure robust pollination. It is also best to rotate where you plant your crop each year to prevent disease, pest issues, and nutrient depletion from occurring. Sweet corn is a temperature-sensitive crop that should be planted only after the soil warms, and the danger of frost has passed.

In this video Brijette Romstedt, from San Diego Seed Company, shares information on types of corn and how to plant your corn for the best results. Whether your garden is big or small, make the most of your space with these tips and watch the full Growing Corn: Planting Tips & Corn Varieties video on the Kellogg Garden Youtube Channel.

Corn requires an average of one inch of water per week, especially when the stalks begin to sprout their tassels. It is essential not to overstress your corn plants when the plants are cross-pollinating. Otherwise, you will find lots of ears that are missing prized kernels. Water corn at soil level whenever possible. It is best to minimize watering plants from above, which could wash pollen off their flowering tops.

Corn is called a heavy feeder and requires a steady feeding of nitrogen to grow and produce corn successfully. You’ve already given your corn patch a great start with soil that has been well-integrated with organic matter. When your corn plants grow to about 2 feet tall, side-dress them with an organic fertilizer that is rich in nitrogen.

Plant corn in full sun, clear from tall trees that might overshadow your crop. Corn varieties are predominately tall and should be planted on the North or East side of your garden so that shorter crops can also benefit from the best sunlight.

What To Plant With Corn

Some great companions plants for corn are beans and squash. Pole beans, squash, and corn make amazing companion plants when planted with proper care and precautions! 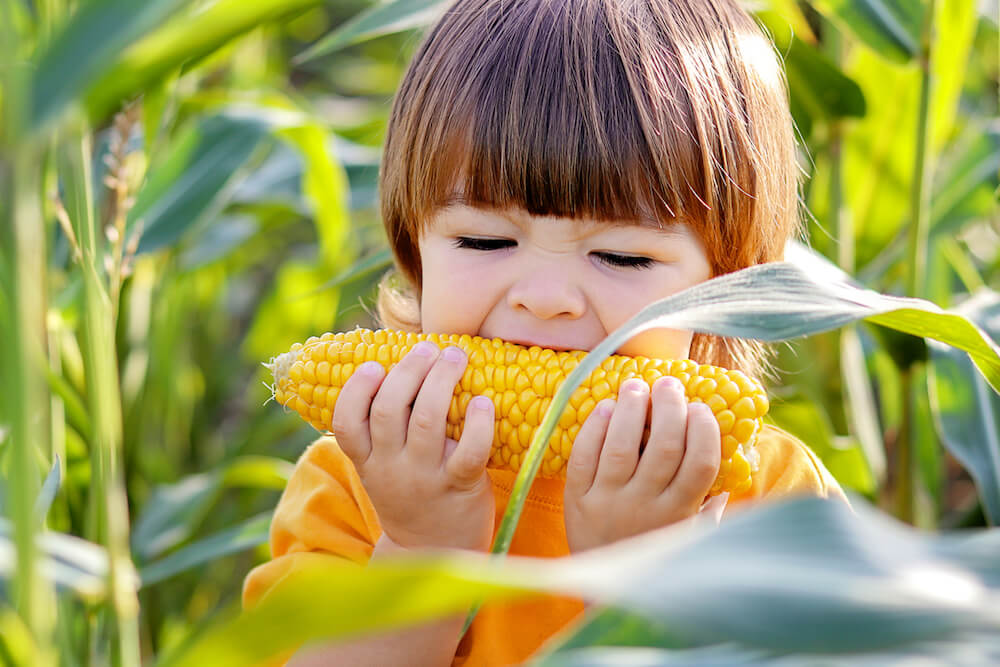 If you sow your corn in well-drained soil that has a healthy balance of nutrients, your corn has the best chance of being healthy. Healthful plants can tolerate a small amount of insect damage better and may deter pests altogether than their weaker counterparts.

Pests may make it into your garden and can be managed organically in a few proven ways:

How & When to Pick Corn

Corn is harvestable approximately three weeks after the feathery tassels grow out if the peaks of the plants. If you want to extend your harvest, consider staggering your planting times in different patches of the garden. You can tell that your corn is nice and ripe when succulent milky juice fills the kernels, and the silky part of the ears has turned light brown in hue.

The best time to start picking corn is early in the morning or in the coolness of the evening. To harvest, hold the stalk just below the ear and twist the tip of the ear of corn until it breaks off the stalk. Cook your corn when it is as fresh as possible or store it in the refrigerator until you are ready to enjoy 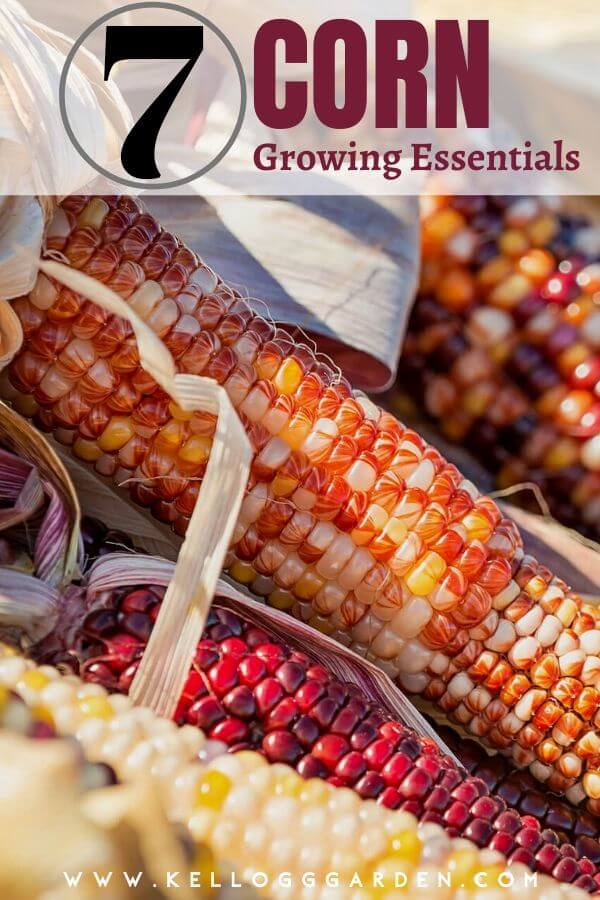